Sometimes reality is so well fused with fiction that it is difficult to distinguish them. That’s the type of cinema Chilean filmmaker Maite Alberdi makes. Her latest installment, ‘The Mole Agent’, “seeks to create an unusual genre crossover, linking traditional police fiction with an observation documentary,” said the Santiago-born filmmaker.

Her fourth production confirms what she told us in 2017 after the premiere of The Grown-Ups (her third film) in Cartagena: “Latin America is a territory of documentary makers, where documentary films are increasingly competing with fiction, and they have the same level.”

In our region, Alberdi stands out as one of the most refreshing documentary voices. Combining documentary elements with fiction components, and thus marking a style of her own, her fourth film gives us an octogenarian James Bond that everyone needs to see.

Rómulo is a private investigator, and when a client needs him to investigate the nursing home where his mother lives, Rómulo decides to train Sergio, a recent widower who has never worked as a detective, to live as an undercover agent in the home. Once infiltrated, it is difficult to assume his role as a mole, and he becomes just another resident at the home…and perhaps the most popular, creating friends everywhere.

The film begins with a touch of humor and immediately enamors/hooks? us with Sergio – a good-hearted, 80-year-old man with a great sense of humor and desire to live a new adventure. The most difficult thing for Sergio, besides assuming his training as a detective, is using the technology necessary to communicate with Romulo and collect evidence. However, little by little, Sergio learns how to make calls over FaceTime, send voice mail over WhatsApp, and use secret video cameras inside lenses and pens. Everything necessary to be a bona fide secret detective.

Once settled in the home, Sergio wraps us in his world as an agent and a resident of the nursing home. From there on, we find moments that keep us curious for what’s next, while others make us laugh, cry, reflect and even think about calling our parents and grandparents immediately.

Sergio is not the only one who steals our heart; the friends he makes at the home do as well—including one who declares his love to him, and another one that captivates us with poetry recitals. This all brings the necessary touches and balance to this excellent observational documentary. ‘The Mole Agent’ protagonists are so charming that it is impossible not to be fond of each one of them, and each scene, incredibly, is more moving than the previous one.

When Sergio finally manages to focus on his role as a mole agent, he begins to give his daily reports to Romulo more accurately. We see that what he finds goes beyond abandonment by the workers of the nursing home, perhaps the opposite. However, his reports make it clear that abandonment in fact exists—the question that Sergio asks us is, from whom.

The phrase by one of the most laureated? documentary makers comes to mind: “A country without documentary cinema is like a family without a photo album”. Chilean director Patricio Guzmán’s phrase comes more loaded than ever, with a Chilean generation of filmmakers who have recently made the southern country one of the epicenters of documentary films in Latin America. Alberdi gives a masterclass in cross-genre filmmaking, and for moments, we forget that we are in front of a documentary. It captivates us from start to finish with wonderful shots and pictures, perhaps leaving the most painfully beautiful one to close the film. 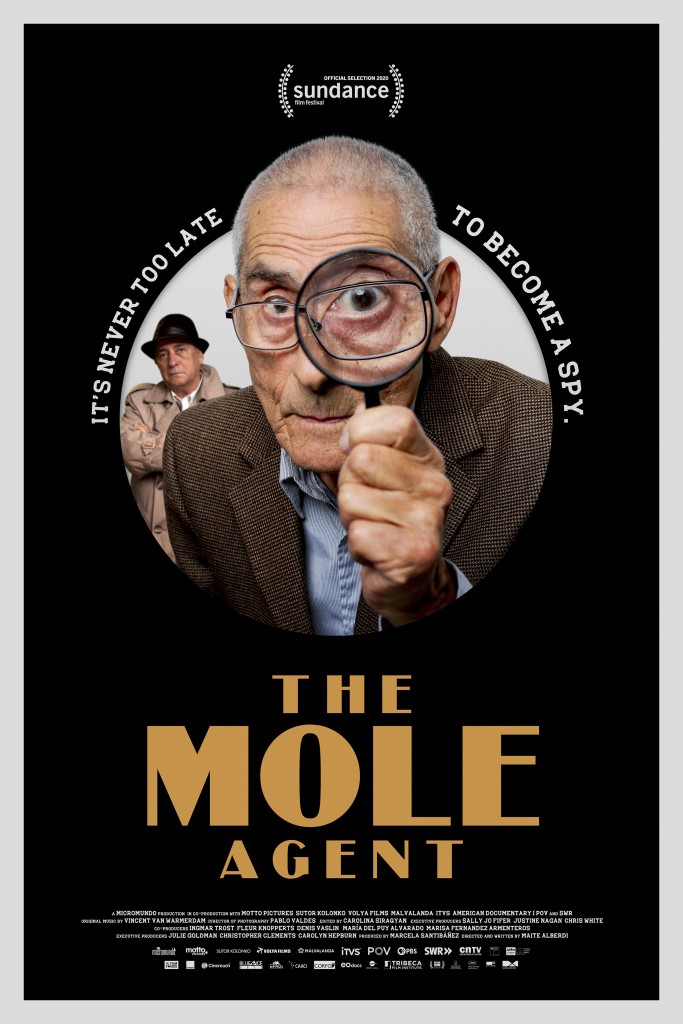 Without a doubt, the particular way Alberdi tells stories is refreshing and much-needed. If you haven’t seen any of Maite Alberdi’s films yet, please do yourself a favor. And if you can watch ‘The Mole Agent’, don’t miss the opportunity.

If you live in the United States, you can find ‘The Mole Agent’ here; in Latin America, it is available through Netflix.